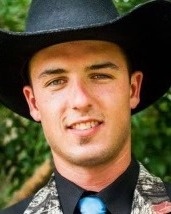 Arliss will also be missed and remembered by his daughters, Hayden Marie Clark and Hailey Lillian Clark at home; his brothers, Brian (Megan) Vorwerk of Fletcher and Reggie (Raegan) Clark of Greenville; his father and mother-in-law, Jeff & Teri Brookhart of Tipp City; siblings-in-law, Lindsay (Niles) McGuire of Germantown and Josh (Lindsey) Brookhart of Tipp City; his paternal grandmother, Pauline Clark Meyer; maternal grandmother, Sandra Knott; his grandparents-in-law, Nick & Connie Brookhart; and many nieces, nephews and cousins. He was preceded in death by his grandfathers, Donald Clark and Lawrence “Bud” Knott; and grandparents-in-law, Donald & Marjorie Leeper.

Arliss was 2007 graduate of Covington High School where he ran cross-country, played baseball, and participated in 4-H. He enjoyed sports and the outdoors, playing golf, hunting, fishing, horseback riding, and playing darts. Most importantly, he was a devoted husband, father, son, and friend.

Funeral services will be held at 10 a.m. Monday, August 1, at Fields of Grace Worship Center, 326 E. Troy Pike, Covington, with Pastor Mark Lynch officiating, with burial to follow in Miami Memorial Park. Friends may visit from 2-7 p.m. Sunday at Fields of Grace. In lieu of flowers, memorial contributions may be made to an education fund to be established for Arliss’s daughters. (link below) Arrangements are in care of Moore Funeral Home, Covington. Online condolences may be left for the Clark family at www.moorefh.com.

To order memorial trees or send flowers to the family in memory of Arliss Clark, please visit our flower store.