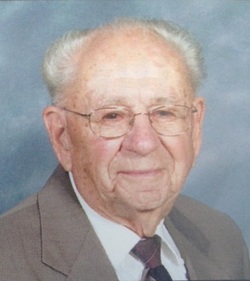 
BITNER, Cal Driver
Age 96, of Covington, passed away Friday September 6, 2013. He was born in Miami County, Ohio, the only child of Jacob Emory & Bertie (Driver) Bitner. He attended the Blind Corners one room school house near his parents’ farm on what is now Hwy 185. He graduated from Bradford High School. Cal first worked for Petersimes in Gettysburg, Ohio, delivering and installing incubators across the country from Wisconsin to Cornell University in New York. Cal later worked for Hobart Brothers in Troy, Ohio, where he remained employed for 43 ½ years and was a member of the Hobart Milestone Club. He served with the United States Navy Seabees at the end of WWII, stationed in Bermuda. Cal married Cathryn Gibson Bitner from Greenville, Ohio, and together they raised their five children along the Stillwater River, Rt. 48, Covington, Ohio. He and Cathryn celebrated 50 years of marriage in 1989. Cal and Cathryn were dedicated and active members of the Covington United Church of Christ where Cal served on the Board of Trustees, was head usher, and was an all around fix it guy for many years. Cal was an avid gardener and was well known for his home grown popcorn. In retirement, he worked for Pearson-Jackson Funeral Home. Although his typical humility would prevent him from such an acknowledgment, Cal was an inspiration to his family and friends. He never met a stranger. Cal was preceded in death by his wife Cathryn and his grandson Lon Bitner. He is survived by his children George & Lou Bitner of Hamilton, Ohio, Bill & Jeanie Bitner of Covington, Linda & Bruno Schroeder of Ocean Springs, Mississippi, Donna & Bill Weikert of Covington, Tom Bitner of Bozeman, Montana; 9 grandchildren; 12 great grandchildren; many nieces and nephews. Funeral services will be held 10:30 AM Tuesday, September 10, at Covington United Church of Christ, 115 N. Pearl Street, Covington, Ohio. Pastor Lynn Labs will officiate with interment following at Miami Memorial Park, Covington. The family will receive friends from 4-8 PM Monday at Jackson-Sarver Funeral Home, 10 S. High Street, Covington. If so desired, memorial contributions may be made to Covington United Church of Christ or Hospice of Miami County. Online memories may be left for the family at www.jackson-sarver.com


To order memorial trees or send flowers to the family in memory of Cal Bitner, please visit our flower store.