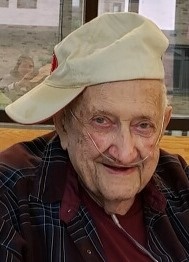 Dick will be missed and remembered by his daughter and her partner, Bonnie Thompson & Michelle Kattner of Muncie, Ind.; his adopted grandchildren, Cheyenne Shively and Shawnee Powell; and several nieces and nephews.  He was preceded in death by his daughter, Billie Linell Thompson; brothers Judson, Warren, Howard, and Ford Thompson; and sister Shirley Meadows.

Graveside services with military honors will be held at 11 a.m. Saturday, July 27, at Highland Cemetery, 7835 W. Ingle Rd., Covington, with Pastor Mona Dale officiating.  In lieu of flowers, memorial contributions may be made to the Covington Fire & Rescue, 801 E. Broadway; or V.F.W. #4235, 173 N. High St., Covington, OH 45318.  Arrangements are in care of Moore Funeral Home, Covington.  Online condolences may be left for the Thompson family at www.moorefh.com.

To order memorial trees or send flowers to the family in memory of Carl "Dick" Thompson, please visit our flower store.