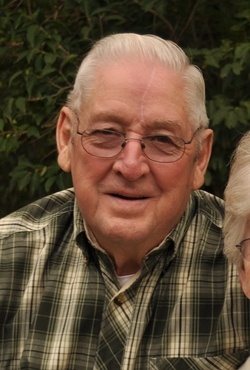 
ALEXANDER, Edwin LeRoy,
Age 78, of Covington, passed away Wednesday, July 23, 2014, at Piqua Manor. He was born June 8, 1936, in Ansonia, Ohio, to his parnents William Wallace & Bessie Ann (McDowell) Alexander. He graduated from Ansonia High School class of 1954. On September 18, 1954, He married Maxine Hamilton and together they shared a life for over 59 years. Ed retired from the City of Piqua as an electric system distribution director and worked with Hartzell Propeller delivering propellers for seven years. Following retirement, he and Maxine travelled all over the United States and spent their winters in Florida. He was a member of the Franklin Masonic Lodge 14 F.&A.M. and he attended the Stillwater Community Church, Covington. He will be missed and remembered by his loving wife Maxine Alexander; children John B. Alexander of Covington, Eddie "David" & Teresa Alexander of Covington, Sandra D.& Bill Garman of Troy; five grandchildren, 4 great grandchildren. He was preceded in death by his parents and siblings Dorothy Alexander Howell, Chalmer J. Alexander, Paul Alexander. Graveside services will be held 10:00 AM Saturday, August 2, at Ansonia Cemetery, with Pastor Bill Cornett and Pastor Ralph Schaafsma officiating. If so desired, memorial contributions may be made to Hospice of Miami County, 550 Summit Ave, Troy, Ohio, 45373.

To order memorial trees or send flowers to the family in memory of Edwin Alexander, please visit our flower store.