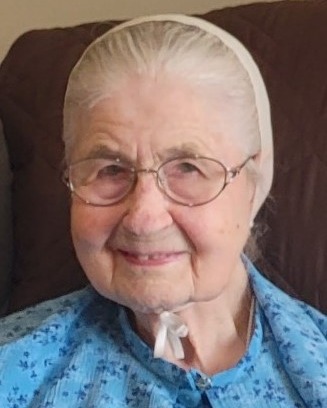 Elsie Mae (Peters) Flory, daughter of Charles W. and Mary Blanche (Montgomery) Peters, was born December 19, 1923 at their home in Covington, Miami County, Ohio. Mother went home to be with Jesus on Thanksgiving morning, Thursday, November 24, 2022, at the age of 98.

She, along with five of her friends, was baptized at 16 years old and committed her life to Christ. She was a faithful member in the Covington district of the Old German Baptist Brethren Church-New Conference.

On January 1, 1944, Mother was united in marriage with John Elmer Flory of Cerro Gordo, Illinois. Dad and Mother spent most of their married life in the Troy and Covington area except for two years she spent with Dad in CPS in Pennsylvania.

Mother had a servant heart and was always concerned and cared for the welfare of the family and others. She was a wonderful homemaker and thoroughly enjoyed sewing and served many meals to their family and friends. Mom and Dad were blessed with over 71 years together until his passing on May 13, 2015.

Dad and Mother were called to the Deacons office in July 1957 where she served faithfully. On August 5, 2012, Dad and Mother called for the anointing service which brought much comfort.

Mother spent her last years at Randall Residence in Troy, Ohio, where she was lovingly assisted and cared for. She made many friends with the residents and staff there, which she so much enjoyed.

Funeral services will be held at 1 p.m. Tuesday, November 29, at the Old German Baptist Brethren Church, 6360 Farrington Rd., Covington. Burial will follow in Highland Cemetery, Covington. Friends may visit from 8:30-11:30 a.m. Tuesday at the church. In lieu of flowers, memorial contributions may be made to EverHeart Hospice, 1350 N. Broadway St., Greenville, OH 45331. Arrangements are in care of Moore Funeral Home, Covington. Online condolences may be left for the Flory family at www.moorefh.com.

To order memorial trees or send flowers to the family in memory of Elsie Mae Flory, please visit our flower store.