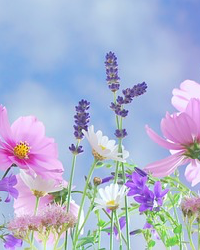 Frances Irene Boyd, 91, passed away peacefully on Monday, April 23, 2018, at her daughter’s home in Shady Grove, PA.  She was born December 14, 1926, near Covington, a daughter of the late Ivan and Ethel Bowman.  She married Donald Boyd on March 16, 1952.  They lived for a brief time in California, and then made their home in Covington, where they raised their family of four children.  Don passed away on July 25, 1986.

Frances sold their home place and moved to Shady Grove, PA in February 1988, where she resided until 2015, at which time she made her home with her youngest daughter and her family.  She cheerfully accepted her declining health and would frequently say, “Have Thine own way, Lord.”  People meant a lot to her, and she was very appreciative of her caregivers and frequent visitors.

Surviving family are her children Donna (Randy) Hess of Chambersburg, PA, David (Bonita) Boyd of Modesto, CA, and Pollyanna (Reuben) Hess of Shady Grove, PA; one brother, Myron Bowman, two sisters, Reva Benedict and Clara (Lawrence) Crist, all of Ohio; one brother-in-law, Paul Riffey of Indiana, and Paul and Ruth (Boyd) Beery of PA.  She was blessed with 16 grandchildren and 47 great-grandchildren.  In addition to her parents, she was preceded in death by a son Philip in 1969, several brothers and sisters, and three infant great-grandchildren.

Visitation and funeral services were held Thursday and Friday at the Brown's Mill Meeting House in Chambersburg, PA.  A local funeral service will be held at 10 a.m. Saturday, April 28, at the Old German Baptist Brethren Church, 6360 Farrington Rd., Covington, with the Home Brethren officiating.  Burial will follow in Sugar Grove Cemetery.  Arrangements are in care of Moore Funeral Home, Covington.  Online condolences may be sent to the family at www.moorefh.com.

To order memorial trees or send flowers to the family in memory of Frances Boyd, please visit our flower store.