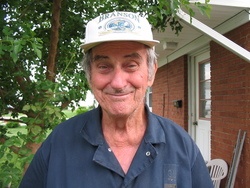 
GEORGE A. BASHORE, born December 18, 1922, at Troy, Ohio, to J. Herbert and Mildred (Streib) Bashore in Troy, Ohio, passed away peacefully on January 28, 2015, at the Covington Care Center. He lived most of his life in Miami County and was a graduate of Bradford High School class of 1942. He enjoyed high school sports and music; sometimes entertaining at school assemblies with his talented drum solos. He also enjoyed dancing and roller skating. He is survived by; his children, Martha J. Richardson of Lima, Ohio; Frank Bashore of Scioto County, Ohio; Benjamin Bashore of Fullerton, California; Sean Bashore of Modesto, California; brother, Robert L. Bashore of Covington, Ohio; sisters, Dorisanne Shuey of Dayton, Ohio and Sue (Jim) Gatling of McKinney, Texas; sister-in-law, Delores Bashore of Iowa; four grandchildren and one great grandchild; many nieces and nephews; long-time friend, Donna Rue, and other friends and relatives. He was preceded in death by his parents; wife, Joyce (Tyler) Bashore; brothers, Joe (Betty Lou), Dick (Lily) and Jerry Bashore; sisters, Betty Jane (Burdette) Miller, Mackey {Maxine} Patty, and Katey {Thelma} (Russ) Brock, Jr.; brother-in-law David Shuey; son-in-law, Jeff Richardson; daughter-in-law, Liz Bashore; one grandson. He was always interested in cars; he liked tinkering with them and selling them. He worked for several auto dealers in the Miami Valley Area.
During World War II he served in the U.S. Army European Theater. In the service he was assigned to the kitchen as chief cook which enhanced his attention to foods and nutrition, and it's effect on healthy living. With this interest, after the war he became involved in selling stainless steel cookware.
He was a member of the VFW Post 8211 in West Milton, AMVETS Post in Covington & Versailles, F.O.E. in Covington & Versailles; and enjoyed eating, socializing and the various activities at the clubs.
Memorial services will be held 2:00 PM Sunday, February 8, at Jackson-Sarver Funeral Home, 10 S. High Street, Covington. The family will receive friends from 1:00-2:00PM at the funeral home. Memorials may be made to the VFW or AMVETS. Online memories may be left for the family at www.jackson-sarver.com


To order memorial trees or send flowers to the family in memory of George Bashore, please visit our flower store.