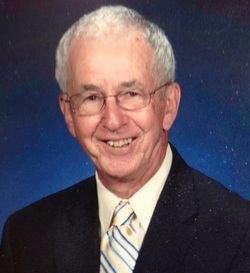 TOBIAS, John David
Age 89, of Covington, passed away, Sunday, June 29, 2014, at his home. He was born January 31, 1925, in Covington, Ohio, to his parents Wilbur L. & Dorthy A. (Shafer) Tobias. John graduated from Covington High School class of 1943 and served in the US Army during WWII as a medic in Europe where he was awarded a Bronze Star. On May 28, 1954, he married Doris E. Perry and together they shared a life for over 60 years. He was an energetic reader and was very knowledgeable on many subjects. He was a former member of Bruckner Astronomy Club and collected stamps and coins. He enjoyed traveling with his wife to all fifty states as well as Scandinavia. He was privileged to play golf at St. Andrews in Scotland with his son Robert. John also enjoyed bowling and learned how to quilt following his retirement from Monsanto Research Corp after 27 years as a Laboratory Assistant. He will be missed and remembered by his loving wife Doris Tobias; son Robert D. Tobias of Edmond, OK; daughter and son-in-law Nan E. Tobias & Charles Schmidt of Edgewood, KY; grandchildren Anna Tobias and Samuel Schmidt; siblings Robert & Janet Tobias of Covington, Norma Baker of Piqua, Patricia Basham of Rapid City, SD; special friend and longtime golfing buddy John Rogers of Bemis Point, NY. The family will receive friends from 2-4 PM Saturday, July 5, at Jackson-Sarver Funeral Home, 10 S. High Street, Covington. Interment will follow at a later date at Highland Cemetery, Covington. If so desired, memorial contributions may be made to Hospice of Miami County, 550 Summit Ave, Troy, 45373. Online memories may be left for the family at www.jackson-sarver.com


To order memorial trees or send flowers to the family in memory of John Tobias, please visit our flower store.