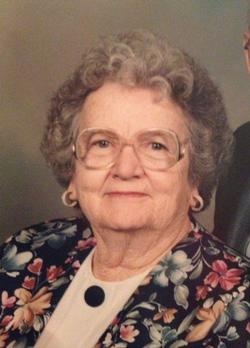 
BRUMBAUGH, Naomi Kathryn Age 93, of Piqua, passed away Tuesday, February 5, 2013, at Upper Valley Medical Center. She was born September 12, 1919, in Covington, Ohio, to her parents William & Grace (Mutzner) Smith. Naomi graduated from Covington High School. On November 23, 1938, she married Herman Ray Brumbaugh in Covington and together they shared a life for 67 years. She was a lifetime member of the Covington Church of the Brethren where she volunteered in the kitchen preparing many Thanksgiving dinners and after funeral meals. She was preceded in death by her husband Herman Ray Brumbaugh; granddaughter Susan Vance; siblings Marion Smith, Carl Smith, Glenna Mae Boyer, Mary Francis Laughman, Ruth Kiefer, Wilma Warner, Wanetta Graves. She will be missed and remembered by her daughter and son-in-law Joanna & Elwood Vance of Indianapolis; son and daughter-in-law Richard & Marla Brumbaugh of Findlay; grandchildren Scott Vance, Matt Brumbaugh, Kevin Brumbaugh, Chris Vangeloff, Judy Vangeloff, Nicole Vangeloff; 13 great grandchildren; brother Robert Smith of Covington. Funeral service will be held 11:00 Am Saturday, February 9, at Jackson-Sarver Funeral Home, 10 S. High Street, Covington. Pastor Mike Yingst will officiate with interment following at Highland Cemetery. The family will receive friends from 4-7 PM Friday and 10-11 AM Saturday at the funeral home. If so desired, memorial contribution may be made to the Covington Church of the Brethren, 101 North Wall Street, Covington. Online memories may be left for the family at www.jackson-sarver.com

To order memorial trees or send flowers to the family in memory of Naomi Brumbaugh, please visit our flower store.