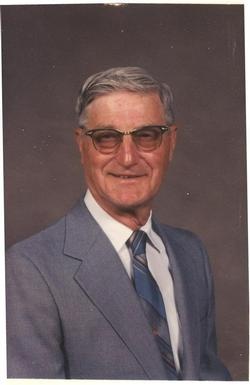 
WATSON, Ned Louis Age 95 of Covington, died in his daughter's arms and surrounded by his loving caregivers on Sunday, October 23, 2011, at Crestline Nursing Home. He was born December 29, 1915, in Kosciusko County, to his parents Fred & Elsie (Brant) Watson. He was preceded in death by his loving wife Dorothy in 2004 and his sister Elizabeth Armstrong in 1994. He will be missed by his daughter Mary Wright of Crestline, OH, and his sisters Susie Kessler of Covington and Jeanette Landes (Harold) of Bradford. Ned graduated from Covington High School and later attended Ohio State University. He was a US Army Veteran serving with the 2nd Armored Division from October 1941-1945, where he was awarded a Purple Heart and Silver Star. On December 24, 1945, he married Dorothy (Hershey) and together they lived in the Covington area for the majority of their lives. Ned owned and operated several milk trucks for Westerville Creamery, worked as a Railway Mail Clerk for the US Railway Post Office (RPO) and retired from Leo E. Rasor Plumbing and Heating, Bradford, in 1980. Ned was also a local farmer and a member of the St. John's Lutheran Church, Covington. He was an avid hunter, fisherman, mushroom hunter and talented woodworker. He would often say "We were put on this earth for one reason? to help other people", and he lived by that. Funeral services will be held 1:00 PM Thursday, October 27, at St. John's Lutheran Church, 200 East Bridge Street, Covington. Pastor Steve Nierman will officiate with interment following at Miami Memorial Park Cemetery, Covington. The family will receive friends from 11-1:00 PM Thursday at the church. If so desired, memorial contributions may be made to the St. John's Lutheran Church or Oakland Lutheran Church, 2045 Olivesburg Rd, Mansfield, Ohio 44903. Online memories may be left for the family at www.jackson-sarver.com

To order memorial trees or send flowers to the family in memory of Ned Watson, please visit our flower store.