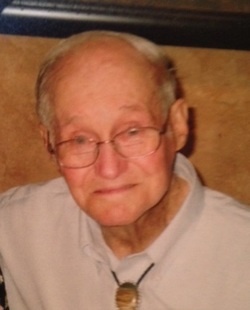 
HOLFINGER, Robert E.
Age 90, of Covington, passed away Wednesday, September 24, 2014, at Heartland of Piqua. He was born February 4, 1924, in Covington, Ohio, to his parents Earl F. & Estella C. (Morrow) Holfinger. Bob graduated from Newton High School class of 1942 and served in the US Army, stationed in the Philippines and Japan, during WWII. On June 6, 1953, he married Evelyn Etter in Covington, Ohio, and together they shared a life for over 61 years. Bob was a lifelong farmer who lived in the house he was born in for all but 7 years. He was a lifelong member of the Miami County Antique Power Association and longtime member of the St. John’s Lutheran Church. He was a past supervisor for the Miami County Soil & Water Conservation and was a member of the Miami County Farm Bureau. Bob enjoyed flying in his plane around the Miami County area as a private pilot. He will be missed and remembered by his loving wife Evelyn Holfinger; children and their spouses Doyle & Connie Holfinger, Roger & Cathy Holfinger, Brian & Brenda Holfinger; grandchildren Jason & Lisa Holfinger, Christopher Holfinger, Tamara & Franklin Hughes, Dustin & Afton Holfinger, Allison & Mathew Robinson, Megan Holfinger, Kelly Holfinger; 10 great grandchildren; twin sister Louise Gibboney; three nieces. He was preceded in death by his parents and sisters Elizabeth Stockstill and Dorothy Kerr. Funeral services will be held 10:30 AM Tuesday, September 30, at Jackson-Sarver Funeral Home, 10 S. High Street, Covington. Pastor Stephen Nierman will officiate with interment following at Miami Memorial Park. The family will receive friends from 4-7 PM Monday at the funeral home. If so desired, memorial contributions may be made to the Alzheimer’s Association. Online memories may be left for the family at www.jackson-sarver.com


To order memorial trees or send flowers to the family in memory of Robert Holfinger, please visit our flower store.