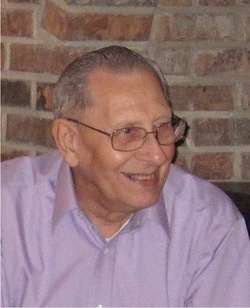 THOMPSON, Robert Lee
Age 91, of Covington, passed away Monday, March 16, 2015, at Piqua Manor. He was born January 28, 1924, in Pleasant Hill, Ohio, to his parents Albert & Ruth (Shafer) Thompson. Robert attended Newton Schools until 1942 and went to Wright Field (Wright Patterson Air Force Base) until he was deployed to Italy, where he was a gunner on 53 missions in a B24 and B17. He earned the rank of Staff Sergeant during his tour of duty. He married Mary Holten in 1947 and welcomed a son Timothy Thompson of Ft. Lauderdale, Florida. Later, Robert married Virginia (Spitler-Brown) and was they were married for 35 years until she passed away. He was a loving stepfather to Virginia’s 5 children Ronald Brown, Terry Brown, Shirley Brown,-Locker, Carol Brown Pence, and Darlene Brown Kenworthy. He was also a fun supportive grandpa to 12 grandchildren and many great grandchildren. He worked at Chrysler, Delco then retired from Production Control after 35 years. He is survived by his son, his step children and grandchildren, two sisters Betty Warner of Kettering and Esther Smith of Piqua, and his loving friend Viva Jean Miller of Covington and her daughters Diane Brown and Sherry Jacquemin. He was preceded in death by 2 brothers Dale & Delmar Thompson; grandson Bryan Kenworthy. Robert was a proud member of the Covington VFW and attended the West Milton United Church of Christ. Services will be held 11:00 AM Friday, March 20, at Jackson-Sarver Funeral Home, 10 S. High Street, Covington. Pastor Ralph Schaafsma will officiate with interment following at Highland Cemetery, Covington. The family will receive friends from 10-11 AM Friday at the funeral home. In lieu of flowers memorial contributions may be made to Hospice of Miami County. Online memories may be left for the family at www.jackson-sarver.com


To order memorial trees or send flowers to the family in memory of Robert Thompson, please visit our flower store.