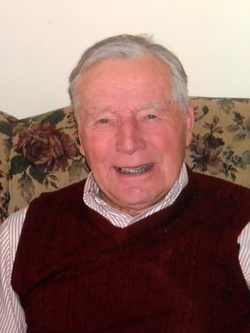 
William Vernon Glen Flick, Jr.
Age 91, of Piqua, passed away Sunday evening, August 25, 2013, at Sterling House of Piqua. He was born August 26, 1921, in Covington, Ohio, to his parents William & Pearl Flick. Bill attended a one room school house for three years, his teacher was Eva O’ Roark Wolfe. He graduated from Covington High School where he played basketball and was admitted into the Covington Athletic Hall of Fame in 2001. He was lifelong farmer in the Covington area and drove a school bus for Covington Schools and JVS for 41 years. Following his retirement, he was given an award for appreciation for his dedication to the students of Covington Schools 1960-1991 and later in 2005 was admitted into the Covington School System Hall of Fame. Bill was a US Army veteran serving during WWII and was a member of the Covington VFW Post 4235 and the American Legion. He was a longtime member of the Covington Church of the Brethren. He loved and adored his family, his church and his friends. He will be missed and remembered by his loving wife Dorothy (Collins) Flick; son Marvin Flick; daughter and son-in-law Linda & Scott Pergram of Covington; grandchildren Aaron Flick of Covington, Amber Pergram of Covington, Ashley Pergram of Covington; great grandchildren Andrea Flick, Autumn Flick, Austin Flick, Lauren Pergram; step children Dean & Gloria Wehneman of Hamilton, Alan Wehneman of Houston, OH, Alice & Lowell Davidson of Noblesville, IN; step grandchildren Brian & Melissa Wehneman of Georgetown, IN, Neil Wehneman of Columbus, Logan Cress of Hamilton, Anthony Cress of Hamilton, Stuart & Miriam Davidson of Indianapolis, Todd Davidson of Noblesville; step great grandchildren Cadence Wehneman, Harper Wehneman, Finley Wehneman. He was preceded in death by his first wife Florence (Mears) Flick; his parents; step mother Elsie Flick; brothers Claude, Wade, and Warren; sisters Halsie Rhoades and Mary Fahnestock (Harold). Funeral services will be held 10:00 AM Thursday, August 29, at the Covington Church of the Brethren. Pastor Mike Yingst will officiate with interment following at Miami Memorial Park, Covington. The family will receive friends from 5-8 PM Wednesday at Jackson-Sarver Funeral Home, 10 S. High Street, Covington. If so desired, memorial contributions may be made to Hospice of Miami County. Online memories may be left for the family at www.jackson-sarver.com


To order memorial trees or send flowers to the family in memory of William Flick, please visit our flower store.